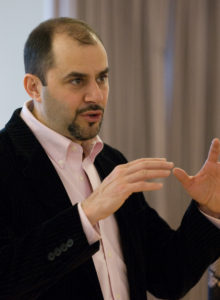 Daniel has been a force in the revival of Argentine Tango, which he ﬁrst encountered in Buenos Aires in 1986. He founded Dance Traveler, a dance tour company, which has taken 1500 people dancing in 7 countries, including Salsa in Havana, Cuba; BttTV, a video production company with more than 100 volumes of instructional video; The Tango Catalogue, which was for seven years the source for all things tango in North America; and he has led dance workshops in more than
120 cities in 13 countries. Before tango Daniel was a tap dancer for more than 10 years with Brenda Bufalino and Leon Collins. He settled
in the Valley in 2002, and is presently teaching at Mt Holyoke College, Smith College, Amherst College, and Hampshire College. More on Daniel at www.danieltrenner.com

Brian has been dancing since 2013. He started here in Western Mass with Daniel’s group, then moved to Oregon where he was joined in one of the US’s premier Tango Scenes, and began teaching in the Columbia River Gorge. He moved back here last Spring, after his first trip to Buenos Aires, and is continuing apprentice with Daniel, while immersing himself in the Tango world of the Northeast ! Meet Brian and enjoy his unabashed enthusiasm for this dance form!!